All the latest information from the textile world

Treating wounds as efficiently as possible has always been of great importance to humanity. In the early days, to prevent wounds from becoming inflamed or festering, they were treated with plant leaves, tree bark or clay-rich soil.

The first recorded use of textile bandages for injuries was in Egypt, between 1500 and 2000 BC. The medical papyrus known as the "Ebers Papyrus" describes possible treatments for various ailments, and includes instructions for treating wounds with bandages. Later, during the Middle Ages, wounds were treated almost exclusively with shredded linen. This bandage material was anything but sterile even when boiled, and frequently made wounds fester.

It was only in the 19th century that people realized that it was germs in the air that could make wounds become septic. This discovery ultimately led to the disinfection of all wound bandages, as well as of the entire surgical environment.

The first ever sterile bandages were manufactured toward the end of the 19th century by the American company Johnson & Johnson.

Today medical textiles go far beyond bandages: the materials used as well as the manufacturing methods involved have undergone a vast amount of further development in recent years, enabling technical textiles to even be used as implants. Nonwovens play an important role here, and demand for textile implants will continue to rise in the future.

Textile-surgical implants have been in use since the 1950s, when people realized that connective tissue can grow through porous textile structures. This led to the first stents, e.g. for the windpipe. Polyester turned out to be a highly suitable material here. It is resistant, with high strength, and does not trigger any known allergies or cause any long-term deterioration. Furthermore, polyester is not rejected by the human organism. 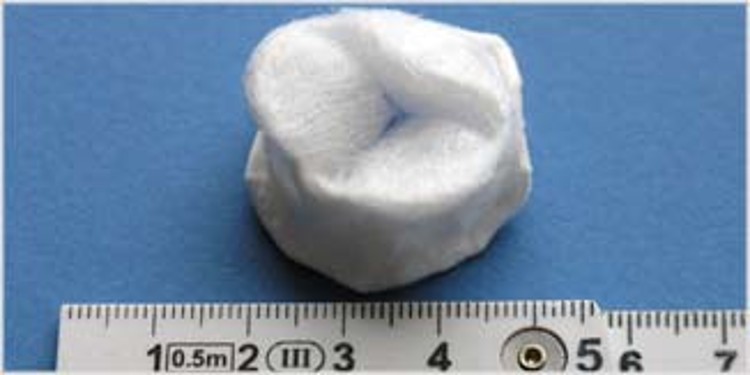 With implants, a distinction is made between temporary and permanent implants:

These implants support tissue regrowth, and either dissolve inside the body or are surgically removed. A well-known example here is the stent: an ever-increasing number of absorbable textile stents are being used in medicine today. The latest research predicts that in future there will be five textile stents for every metallic one, and nearly all of them will be absorbable.

Where temporary implants are concerned, absorbable nonwovens are also being used increasingly often, primarily in wound treatment. An example here is the use of wound materials made from seaweed fibers. One of the properties of seaweed is the capacity to sharply slow the growth of bacteria. Nonwovens made from seaweed fibers are used in the human body to strengthen, e.g. muscle tissue. The nonwoven no longer has to be removed because the body absorbs it completely.

Over time, the implant replaces the body tissue. Textile heart valves are a well-known example of this. Nonwovens are used in permanent implants, too, and also serve as a basis for the cultivation of tissue cells. On a pre-formed, absorbable nonwoven, a three-dimensional transplant is cultivated – to recreate an ear, for instance, or a nose. Specially spun nonwovens are particularly suitable for these applications since they are highly porous, and have no concave or convex surfaces.

By the middle of the 21st century, according to a United Nations forecast, the world's population will have increased to over nine billion people. This development – combined with the rise in average life expectancy and our increasingly unhealthy nutrition – is confronting medical technology with major challenges. Technical textiles are helping to solve these problems in an affordable and sustainable way. Yet numerous common diseases, such as cardiovascular discomfort, can be minimized from the start, or at least made far less risky. Here, being "body-conscious" and maintaining one's own health are often enough in themselves.